Was Raisel Iglesias a One-Off, Elite Closer for the Angels?

The Angels started the 2021 season with what could only be described as a questionable bullpen with two exceptions, in the form of Raisel Iglesias, an established, premium arm, and Chris Rodriguez, a young, promising prospect from the farm system. As the team limped past the Trade Deadline, the front office shook things up and made a series of promotions from the farm system to audition some new, young arms in anticipation of rebuilding the 2022 bullpen.

Realistically, if Minasian focuses most of the available payroll and resources for one or more starting pitchers, a shortstop, etc., that will leave little left for relief help, thus relying heavily on that aforementioned bastion of young arms. The signing of Aaron Loup did not come without a cost, so barring a Moreno financial flex, it is quite possible the Angels front office may be done in this area, despite a potential desire to retain Raisel.

Certainly, the Halos did extend Iglesias a Qualifying Offer, but he did not accept, increasing the likelihood he will play for another team in 2022. Also a Raisel extension would likely fall in the $15M-$18M per year range, maybe more, so allocating for this will be very burdensome on team payroll, unless Arte intercedes.

Finding someone to replace Raisel will be made more difficult, because, although there is a fairly large pool of relievers available in free agency, there is a dearth of top-end talent to pick from this offseason. Minasian will be forced to either retain the increasingly expensive Iglesias or find a similar type of arm in trade, again (Loup was a good target!).

In fact here is Raisel Iglesias’ Statcast player similarity for reference on how few pitchers there are that even come close in quality to the Angels reliever: 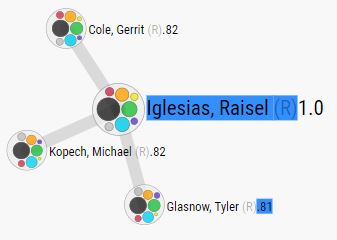 That is a trio of elite names. This fact may lead the Halos to seriously consider a contract, just on the principle of how good he is, but again, if he accepts, they will be pigeon-holed financially. If you branch out and look at Cole, Glasnow, and Kopech, the closest similarity of relievers you find are free agent Ryan Tepera and Rays reliever Diego Castillo, so if Moreno wants to significantly open the wallet, retaining Iglesias could, still, be a worthwhile and, as the Orange County Register’s Jeff Fletcher reported, possibly mutual goal.

If the Angels move on from Raisel, they will still need to acquire 1-2 more relievers this offseason, to build proper depth. Loup may be our new closer, but he could also be a set-up guy, too. Either way, he is a nice arm to add to the back-end of the bullpen

That is a good group of arms, in principle, yet it still feels incomplete and could use another closer option. If Chris Rodriguez had not been injured it would have felt more “full”, perhaps even finished to a degree.

Although the Halos probably want a top-tier closer, they may be priced out of that market, unless they go the trade route or, once again, Moreno opens the pocketbook. As it stands, this is probably our Opening Day 2022 bullpen (generally the team starts the year with eight relievers in order to stretch out the rotation):

On paper that is a fairly solid relief corps. Were you to add another back-end arm to that list, it would likely be well inside the Top 15 in MLB, i.e. a real asset to team production.

However, as it is currently constituted, this bullpen may be slightly above average, at best, barring multiple breakout performances. Basically, outside of Loup and Mayers, there is a lot of uncertainty and risk, for good or bad, with this group of arms. This variability adds risk.

Reducing uncertainty and risk is GM Perry Minasian’s job, which is why the Halos would be best served finding another back-end reliever, particularly a guy who can close games, preferably, to help reduce the bullpen’s variability. If that is re-signing Raisel, one of the best they can likely acquire, or signing an alternate free agent or, more probable, trading for a preferred arm, that could reduce the variability in performance for our 2022 relief corps.

The 2021 Los Angeles Angels were spoiled with the likes of Raisel Iglesias and now Minasian is tasked to try and fill that gap, whether it is re-signing Raisel, plugging it with Loup, or finding another solution.