Author Note: Due to the wildly active free agent market leading into the CBA expiration date, things moved so fast that the author decided to keep the original write-up of this installment of the Primer Series and simply strike-out or slightly modify content to reflect the multiple free agent signings over the last week.

Rotation help, particularly in the front-of-the-rotation, is clearly the Angels greatest need and has been for some time. The addition of Syndergaard, while adding some level of risk, is a nice step forward. Picking up back-end depth, by signing Lorenzen, builds depth and can set the stage for a potential trade,  but Minasian is almost certainly not done.

Fortunately, for the Halos, there are some premium arms available in free agency and, perhaps even more importantly, some of these starters could possibly be had on a short-term contract (hint, hint Arte). Additionally, the trade market has some options as well, some also short-term.

Free agent names (age in 2022 season in parentheses) of particular interest include:

Certainly there are other starters available, but these are the names that have a track record of success, the pedigree, and/or the potential to pitch closer to the top, than the bottom, of the rotation. Those that are struck-out have already signed since the author first penned this part of the Primer Series (boy this market moved fast in the week leading up to the CBA expiration!).

Scherzer, Syndergaard (signed!), Verlander, and Greinke strike me as the type of guys the Angels would more likely target this offseason, simply because they all may be willing to sign for no more than two years, which would fit an aggressive financial push by Moreno, if Arte does significantly exceed the CBT threshold for the first time since 2003. Noah may seem odd, here, but he is coming off of Tommy John Surgery (TJS) and, whether the Mets do or do not make him a Qualifying Offer, he may be willing to sign a soft 1-2 year pillow contract to re-establish his value (and, of course, he did!).

Beyond that group, the remainder contain a mix of established names. Perhaps the most interesting one is Carlos Rodon who had a breakout season in 2021, although he had some injury concerns near the end of the year. Rodon was actually the best starter, on a Wins Above Replacement (WAR) per Innings Pitched (IP) (WAR/IP) basis last year, out of the available free agents (even better than Scherzer). He, too, may be willing to sign a 1-year pillow contract to re-establish his health on the open market. 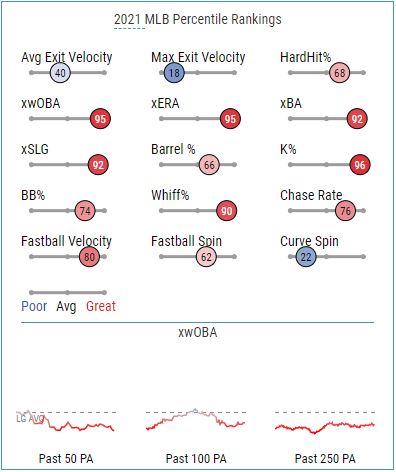 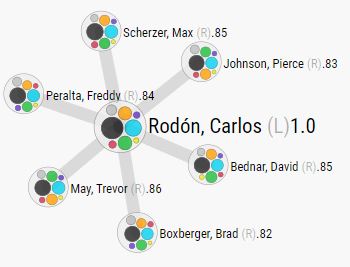 Also, Robbie Ray, who compares favorably, per Statcast, to Scherzer, Cole, Darvish, Nola, and Cease, was probably of interest to the Angels front office before he inked a deal with the Mariners: 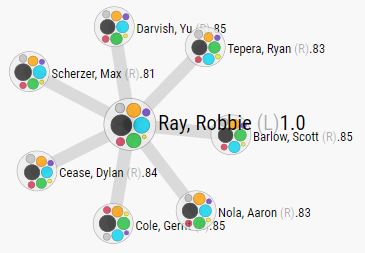 Additionally, if Koudai Senga is posted, he would be a potentially interesting and possibly more affordable arm. Of course, Marcus Stroman, who has effused his admiration for Mike Trout, could be a target. The other names could eat innings and have certain characteristics that will attract a host of suitors. One name the Angels are quite familiar with is Alex Cobb, who could potentially be extended or resigned. He compares favorably to two other interesting starters, German Marquez and Luis Castillo: 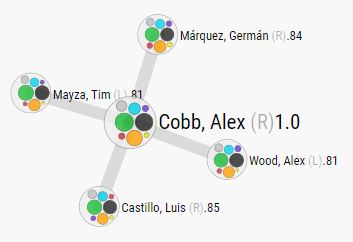 The trade market is more difficult to pin down, but it seems very plausible Minasian could go this route, in addition to free agency.

As was mentioned near the Trade Deadline, this year, SP Max Meyer’s name popped up as part of a proposed Marlins deal that fell through, potentially involving Brandon Marsh, so he could still be a target (or not, since the Angels didn’t go for it, mid-season). In fact, Minasian could pick up a combination of starters out of both free agency (two already!) and trade, for an additional premium arm, increasing team depth in the rotation and using any spare starters out of the bullpen.

Other trade targets of interest might include names like Luis Castillo, German Marquez, Shane Bieber, Max Fried, Tyler Mahle, Antonio Senzatela, Sonny Gray, Tyler Glasnow, and/or Pablo Lopez. On the prospect side, the Angels might be able to find a name like the aforementioned Max Meyer, along with others, like Matthew Liberatore, Daniel Espino, Hunter Greene, MacKenzie Gore, Aaron Ashby, Jhoan Duran, and Nick Lodolo, among others.

Perry Minasian will have to be very mindful about team payroll when considering the various names in free agency and trade. For reference, as discussed on MLBTradeRumors.com, Justin Verlander, entering his age 37 season, signed a 2-year deal for $66M based on a 2019 6.4 WAR campaign, so Max Scherzer, heading into 2022 at age 37 coming off a 5.4 WAR effort, will probably pull in a larger contract (and, in fact, he pulled in an AAV record-breaking 3-year, $130M deal from the Mets!).

This essentially means, based on the Finances Section of this Primer Series, that signing a guy like Max will eat up most of the available payroll, creating a quandary for both Minasian and Moreno; putting increasing pressure on the latter, to open up the wallet, further.

The bottom line is that the starting pitching staff can, should, and will be reinforced this offseason. Despite the Syndergaard, Lorenzen, and Loup signings, the Angels currently have a little over $20M to work with, barring a yet-to-be-seen Moreno push over the Luxury Tax, but that should be enough to get at least one of these names to add to the staff.

Remember that there are permutations to this offseason that Minasian and the Angels front office see a lot more clearly than fans. It could be free agent signings and/or trades, but if you sign 2-3 starters from free agency, you can probably package up 1-2 top prospects along with one or more other players/prospects and trade for another starter, i.e. addition by subtraction (numbers!). For example, it might be signing Syndergaard and Stroman, then dealing Detmers, Marsh, and Barria for a guy like Luis Castillo. The combinations are out there, it is just a matter of finding one that makes sense for the team.